Every producer has their own unique way of making music, so I'm not going to pretend that my way is the only way (or the best way for that matter), but for me it works very well. Hopefully something on here might be of interest in some way.

There are three ways I tend to kick off a new track. The first is where I have a clear idea of a riff or end product in my head, the sort of tune that I might have brainstormed from a dream the night before, or around in my head for a few weeks and refuses to go away. In this bracket I also include remixes and bootlegs, as I tend to have a rough idea of the finished track before I start, although the creative spark often changes as I go along. Ideas often strike when I least expect it, so I use my phone to jot down or speak / sing / beatbox them wherever I am - car usually (when it's safe to do so!). This is priceless to ensure I don't forget any of the ideas when they pop into my head. If I had endless amounts of time, I'm never without any ideas for songs as I tend to file all of these ideas away properly for a rainy day.

The second way I start a new track is to simply hook up my sequencer and play with sounds. Jamming is the fun route as the direction of the track can go all over the place, but it doesn't matter. It's hit and miss, but sometimes you strike gold and take it from there. Some of the best Seismic Waves songs I've produced with Ali Rumba have been done this way.

The third way I kick something off is by collaboration. My album Supernova was originally an extended EP of my own work, but it quickly grew into a gargantuan collaborative project right across the globe. At times it was a bit of a runaway train, but from a creative perspective it was refreshing to have the injection of other people's ideas and performances to enhance things.

For example, my collab with Viba, 'Static Shock', was a demo I put together and was reconstructed by Viba. Danny Malone then added some guitar elements and the final track sounded completely different to that original demo.


Another song, 'Symphony of Rain', was a riff I randomly strummed on a guitar, which Danny Malone then played along with and made his own. The songs 'Gravity Down' and 'Future' had Martin Finnigan's and Julie Gordon's original vocals recorded at at the BBC Media City complex in Salford. Kat Sax recorded her parts for 'Piano's Promise' at The Warren's studio in Hull. Only in post-production were their contributions inserted into the final track.

To get going, I overload the session with many instruments and riffs, then fine tune the best bits which work well in combination. Critical layers of the track are:

Later on I also throw in some white noise and supporting effects.

The clever bit from a producer is not always what you hear in the final track, but what you remove to maximise the impact of it. Some of my tracks include dozens of instrument and channels in the sequencer, but others can be counted almost on one hand. Simplicity and complexity both work well in different parts of a track, or different genres, so a deep minimal tech track isn't going to need too much additional programming and most emphasis will be on getting those few elements bang on the money. Sometimes I'll actually sequence a simple riff that drives the whole story of a new track, then completely remove it leaving the clever elements and chord changes behind. 'Supernova Sun' started off following the riffs to Chris Isaak's 'Wicked Game'. 'SP1D4R M0NK3Y' started off following the riffs to a D:Ream song, but sounds nothing like it with those original elements removed.

Sidechaining key sounds is also critical - normally the kicks and parts of the rhythm section, but also vocals to ensure they stand out. Sometimes choppy bass sounds are helped with sidechaining too. This means that the sidechain elements are not drowned out by all of the fiddly filter sweeps, delays, reverbs and other distortion and everything is kept clean and in check.

Keeping an eye on an element's EQ frequency against the rest of the track is also important. If you cloud a song with too many bass elements, none will stand out and the track will sound dull. The same could be said of too many mid EQ synths or too many tinny sounds and hissy percussion at the top end.

Although everybody's taste is different, it's always good to ask advice of DJs, producers or friends for their input into the structure of the track. Maybe the build up takes a little too long to keep the interest going, the breakdown kills the track mid-flow, or you can't quite hear your favourite instrument or vocal loud enough. Feedback is a very good thing and sometimes you can be too close to getting that bassline right to realise the track doesn't get going for 3 minutes.

I'll also take the opportunity to listen to it in as many different environments as possible - studio speakers, earphones, car, or club if I'm lucky - to ensure that the mastered track sounds just right. This is a really important part which a lot of producers often overlook. Big speakers are good, but as far as the studio goes this isn't as important as having them acoustically aligned in the room to your ears. There are lots of YouTube videos on this but I've included one on this page for reference.

When all that's out of the way, the track is essentially done. From here, there's the opportunity to mess with the elements to create an instrumental, a dub version, or remove the kicks and stuff to throw together an ambient chillout version. This is often good to emphasise parts of the track which the sidechained parts would normally drown out, as well as creating a completely new vibe on a song, maybe for a different audience or setting.

I've tried others, but this is the main sequencer I use. Visually unique with its virtual synth rack  - you can spin the rack around, then drag and drop virtual cables between devices. This, coupled with the ease of controls, automation of every preset effect and quality of sound output means I can produce a demo track at speed with little fuss, then enhance it into the final sequenced session. 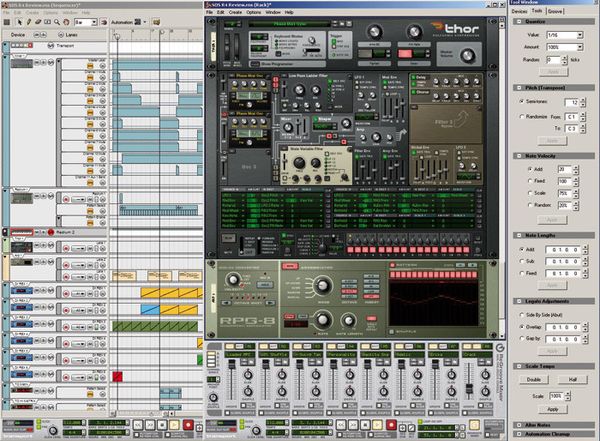 The power of Ableton is in the amazing set of effects it can produce, as well as being a fantastic tool for live performances. Being VST compatible you can also throw all sorts of plugins into it.

I prepare customised samples, loops and sequences in Ableton and import the processed wavs into the Reason session. It will always be this way around for me, as Reason is so easy to throw the master track together. Aside from that, if you can get past the curious user interface of Ableton, its power cannot be denied.

Adobe Audition (formerly Cool Edit Pro) is fantastic for advanced wave editing. I use it to fine-tune key aspects of processed samples, but mainly I use it for the all important mastering of the finished track. It doesn't sound like much, but Reason's built in mastering rack can leave as much as 2 or 3% spare volume available on the wav file, which can be increased with careful dynamic compression. It's also great for neat tricks like removing / isolating vocals from sampled tracks or digitally cleaning hiss, pops and clicks from vinyl recordings. 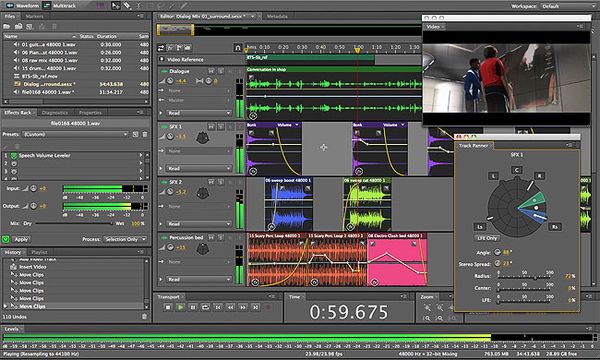 I also make use of professional mastering. I have used several providers for this, but most recently I used Nicky Howard @The Fat Mastering for the final mixdown of the tracks for my Supernova album.